Miscanthus and EU policy on sustainability, renewables and the green economy

‘Why use up forests which were centuries in the making and the mines which required ages to lay down, if we can get the equivalent of forests and mineral products in the annual growth of the fields?' Henry Ford*

Manufacturing in Europe has been declining steady for decades, replaced by a shift to service- based industry, but also due to the financial crisis, and competition from developing countries. A shift to the knowledge-intensive service sector is not conducive for job generation. Manufacturing has been known to create jobs in other related sectors; ‘each additional job in manufacturing creates between 0.5 to 2 jobs in other sectors'. Manufacturing is also the main driver of research and development. So, a decline in manufacturing can affect other industries and the economy as a whole (1). The wide de-industrialisation occurring over Europe is however not even, neither is the recovery in manufacturing that is occurring as a result of EU and national policies.

In 2012, the European Policy Centre, urged EU to cooperate with its member states and industries to support manufacturing, with particular emphasis on ‘advanced manufacturing technologies for clean production, key enabling technologies, bio-based products, sustainable industrial policy, construction and raw materials, clean vehicles and vessels, and smart grids' (1). Changing to a bio-based economy, requires substituting commonly used raw materials, that are produced from petrochemicals or minerals, for those that can be obtained from renewable resources that are plant and animal based (2). Thus, the importance that the European Commission gives to agriculture, can be gauged by the fact that, in 2011, nearly 50% of its funds were allocated to the schemes under its Common Agricultural Policy (CAP). It wants to promote a new partnership between Europe and its farmers, to make agriculture competitive and sustainable, to guarantee quality food production, to help preserve the environment and also develop rural areas. CAP is planned to make a sizeable contribution to Europe's targets to reduce greenhouse gas emissions by 2020. One of CAP's purposes is also to promote smart and inclusive growth in rural areas (3).

Surplus lands that are not used for cultivation are expected to rise in Europe. It is expected to be 14–21% of total agricultural land in 2020 and increase further to 22–42% by 2030 (See Figure 1 for variations in surplus land in different parts of Europe). Some of the reasons accounting for this change in land-use are that research will contribute to better yields in crops in all parts of Europe; and due to negative population changes. So, land that would be available for non-food crops can increase to 20.5 million hectares (Mha) in 2020, and to 26.5 Mha in 2030 (6). However not all the land that is surplus would be available for use for non-food crop production according to the European Commission (7). 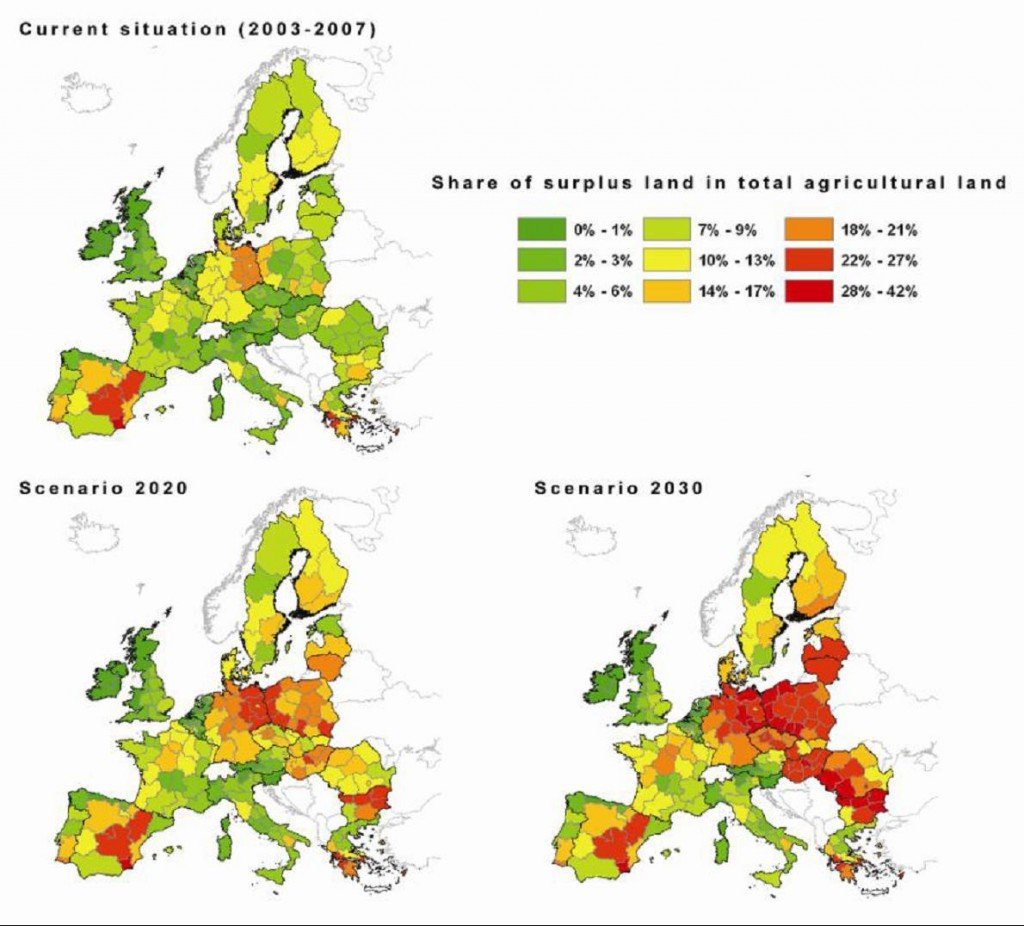 Figure 1: ‘Distribution of surplus land in per cent of total agricultural land in each region' (Source :Biomass Futures D6.4_4Fcrops policybriefing.pdf).

Designing manufacturing along the ‘cradle to cradle’ (C2C) concept, helps to promote environment protection and jobs, and industries are increasingly adopting this change. This is bound to increase demand for sustainable raw materials in all fields, including construction, composites, textiles, or even pharmaceuticals. Natural fibres, and their products, are predicted to be a common raw material used (2). Grown on surplus land in different climatic zones in Europe, they can supply domestically produced raw materials for local manufacturing industries, promoting green economy. Natural fibres, can be used directly to make textiles, paper and fabrics, or indirectly in biocomposites, or for production of biofuel. They can be derived either from wood or from non-wood sources. Natural fibres are being seen as viable alternatives to man-made glass fibres or synthetic fibres, since they have several advantages. They are cheaper, have low density, competitive mechanical properties, effect carbon dioxide sequestration, are sustainable, recyclable, and biodegradable (8). Moreover, they can be processed by biological modification instead of chemical and physical methods, making products from them completely natural (2).

The natural non-wood fibre crops that have so far been popular in Europe are hemp, flax, bast, leaf, cane, straw from cereals, grass and seed (2,9). Carbon neutral plants, that can grow with use of little or no chemicals, with high annual biomass yields, like Miscanthus are ideal candidates too (2,6). Cellulose yields from annual plants, can be three times more than from trees, making them an attractive alternative to wood based products (9). Miscanthus has been used in the production of composites, like composition boards, including particle board (extruded and plate-pressed), and fibre boards, especially medium-density fibre (MDF) board, composed of 82 % of fibres. The MDF are commonly used in construction, furniture (for indoor and outdoor use), interior panelling and insulation (9). Composites made from lignocellulosic plants have been also used for making musical instruments, surf boards, textiles, packaging material, and horticultural products (10). Composites can also be used in cars, trucks, aircraft and railways. Non-wood fibres have been used in automobiles, initially in Europe and then in America. Europe still is the largest user of bio-composites in cars in the world, in door panels, package trays, seat backs and trunk liners (8). They have replaced steel and ferric alloys in car fabrication from 80 percent (in 1965) to 60 percent (in 1995). Henry Ford, pioneered the use of composites in cars, by designing a ‘car body entirely in polymer, a car “made of soybean” in 1941' (8). More recently in 2013, 86 components amounting to just 46 kilos were used in the S-Class Mercedes-Benz (10). Future markets are anticipated to be highly competitive and companies with innovative capabilities can thrive and gain market share.