Use of Miscanthus Giganteus and other biomass is considered by the EU and UK as a significant factor to meet its 2020 and 2050 targets, in reducing greenhouse gas (GHG) emissions. The Climate Change Act 2008 of UK, aims unilaterally, for reduction of domestic greenhouse gas emissions of 34% by 2020 and of at least 80% by 2050. The 2020 Renewable target for UK is that, 15% of its energy consumption is derived from renewables. In 2010, only 3% of its energy consumption was from renewables.

However, concerns have been raised about the sustainability of biomass use, especially in the context of alternate use of land for food production, and of the biomass for use in construction, bedding, paper etc; in addition there are the environmental impacts on biodiversity, air, water and soil to be considered too. Due to the increasing attention these concerns have received, they have been extensively reviewed by the government and the scientific community (1).

Of the total biomass, that is used for production of biofuels, used in bioethanol (blend of petrol and liquid biofuel) and biodiesel (blend of diesel and liquid biofuel), as well as electricity production, approximately 15% originate from UK crops. In 2013, this came from 51 thousand hectares which is 0.8% of the arable area in the UK. Arable land in UK is approximately 77% of its total land area (1,2,3).

The biomass that is imported, comes from neighbouring European countries, but also from as far as the US, Canada, Latin American countries, and Asia (Malaysia and Indonesia). Among the major biomass material imported are corn, oilseeds, palm, soy, corn, sugarbeet, sugarcane, wheat, and residues from neglected forests and unused co-products (e.g. sawmill residues). In 2010, Europe consumed most (13 million tonnes) of the wood pellets produced worldwide (16 million tonnes) (3). However, there have been instances when corporate practice in developing countries exporting biomass, have been unsatisfactory and unsustainable (1).

To ensure that the biomass use would be effective in reducing GHG emissions in the short and long term, the UK government, on recommendations from the Committee on Climate Change, decided to boost its supply from domestic sources, as reliable global supplies would decrease by 2050. The portion of energy to be derived from biomass would be capped at 10-12%. Figure 1 shows the possible contributions from different sources based on several scientific studies that were reviewed. 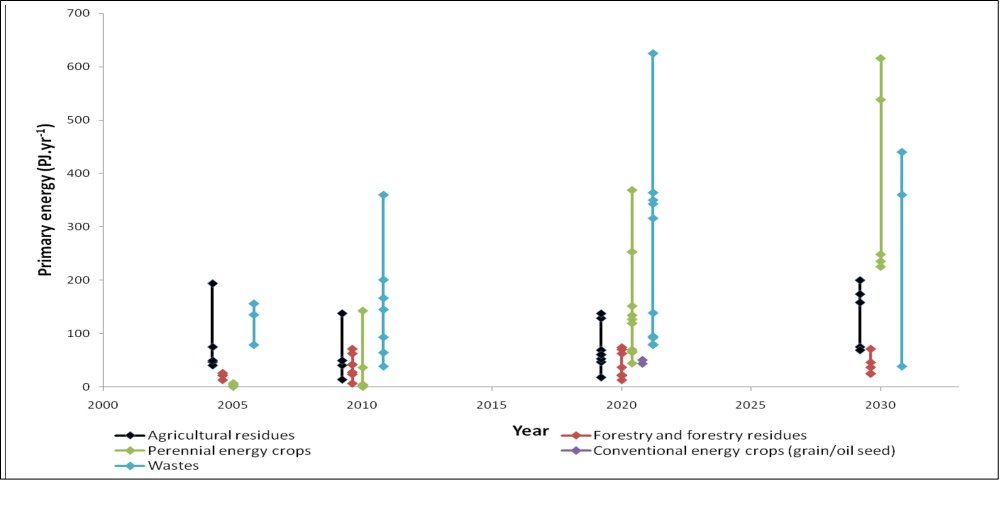 To ensure secure as well as sustainable sources, the government made many recommendations (that are not all covered here, as they are too extensive and do not directly pertain to this article). To make energy production and use sustainable, the government foresees, more direct heating of homes and industries, use of low carbon generated power, combining heat and electricity production, use of purpose grown crops (energy crops) for biofuel production instead of corn, and including more domestic and agricultural wastes.

Use of straw (from wheat, barley, oats) and sugarbeet to produce biofuels will continue at current amounts, with only a little increase. A major expansion of area under Miscanthus Giganteus, other perennial grasses like reed canary grass, switchgrass and SRC would be encouraged. The reasons for this are many (1,2).

The perennial grasses, specifically Miscanthus Giganteus and SRC are seen as being more sustainable since they have a lower carbon impact (0.5 to 6.1 t CO2 e/ha/yr), than the annual food crops (3.4 to 11t CO2 e/ha/yr), provided, the biomass crops did not replace food crops and lead to indirect land use emissions (1).

In 2014, researchers from Bangor University and the Thünen Institute in Germany concluded that crop-biogas and liquid biofuels are not the best way to use biomass to reduce GHG emissions, when the land, technique, inputs and subsidy used are taken into consideration. They could on the contrary lead to increased GHG emissions due to indirect land use change emissions. According to them, Miscanthus Giganteus (woody grass) heating pellets and waste-biogas, effect at least ten times more GHG mitigation per tonne of dry matter biomass and per hectare of land used (4).

Miscanthus Giganteus yields significantly more than food crops used for making biofuels, or even perennials like switchgrass or SRC.

In UK, Miscanthus Giganteus yields average 12-15 oven dried tonnes (odt) per hectare (equating to 15-18 fresh tonnes per hectare). Though there has been a lot research on SRC yields, data in this regard is scarce. SRC are usually harvested once in 3-4 years. Willow SRC at first harvest gives 7-12 odt/ha/yr and poplar a yield of 8 odt/ha/yr. Annual UK cereal straw production is 9 to 10 million tonnes per year; with yields of 3.5 tonnes/ha for wheat and oats and 2.75 tonnes/ha for barley (2).

In a study published in 2008, from Illinois,US, Miscanthus Giganteus was compared to corn and switchgrass. The production of ethanol feedstock per acre of switchgrass was similar to corn. Switchgrass is more sustainable than corn as it requires less chemical inputs and is perennial (so it involves less cultural practices), thereby reducing use of fossil fuels and GHG emissions. It was estimated that if corn or switchgrass were used to offset 20 percent of gasoline use (US goals), 25% of US current cropland would be necessary. Since Miscanthus produces 2 1/2 times the amount of ethanol produced per acre of corn or switchgrass, only 9.3 % of land would be necessary. Producing ethanol by using Miscanthus Giganteus as feedstock could reduce the land necessary to produce biofuels (5).

Growing cereal crops requires good arable land. Miscanthus and SRC are suitable for growth on land of low productivity, or those contaminated with heavy metals, even though yield may be less than optimal. Using Giant Miscanthus and SRC can reduce indirect land use change emissions and minimise impacts to food production. So, area under bioenergy crops can be easily expanded, using millions of hectares of that need to be remediated (2).

Since, Miscanthus Giganteus has lower concentrations of moisture and ash, in comparison to other bioenergy crops, it is being considered as a key candidate for use in biomass-to-liquid fuel conversion and biorefineries (7).

Considering yield, profitability and chemistry, Miscanthus Giganteus proves to be the better option even among perennials and SRC. In addition, it has less environmental impacts and is more sustainable compared to cereal crops.

Currently, only 0.01 Mha of land in UK is being used for bioenergy crops, providing 0.21 Twh equivalent. Some of the reasons, preventing an increase in the area under Miscanthus, is grower acceptance, planting and harvesting capacity, and social resistance. The government wants to increase area under Miscanthus by 20% every year, to cover 0.04 Mha (0.22% of UK's agricultural area) by 2020, to generate 0.855 Twh equivalent (1).

Ongoing research will lead to improvements in productivity of Miscanthus, ‘and even though its expansion on a large scale has begun, Miscanthus is still in its infancy as an agricultural product', and is a crop with great potential (5).

This website uses cookies to improve your experience while you navigate through the website. Out of these, the cookies that are categorized as necessary are stored on your browser as they are essential for the working of basic functionalities of the website. We also use third-party cookies that help us analyze and understand how you use this website. These cookies will be stored in your browser only with your consent. You also have the option to opt-out of these cookies. But opting out of some of these cookies may affect your browsing experience.
Necessary Always Enabled

Any cookies that may not be particularly necessary for the website to function and is used specifically to collect user personal data via analytics, ads, other embedded contents are termed as non-necessary cookies. It is mandatory to procure user consent prior to running these cookies on your website.