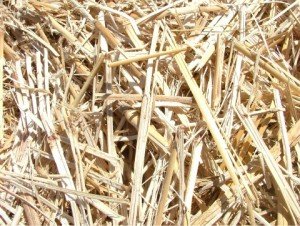 There is global interest in the use of bio-composites in the construction industry, since they are made from natural materials that are renewable, recyclable, biodegradable, and have a wide range of uses as structural and non-structural building elements.

The conventional construction sector is one of the largest consumer of raw materials (1). It is estimated that, globally, buildings consume:

Most of the current construction materials are derived by the extractive industries (cement, steel, aluminium, sand, stone, clay and oil) and the manufacturing, of many construction products results in environmental damage and biodiversity loss. Moreover, the debris from construction and demolition, leaves a large ecological footprint. It accounts for 40% of the landfill in the US, and is composed of 30-50% wood, ‘drywall' and plastic. These materials can be replaced by biocomposites that are manufactured from natural fibres (3).

Biocomposites are one of the main materials that are being used in the green materials and building movement worldwide (4). These are being promoted also as an replacement for the synthetic fibre reinforced composites, which tend to use petroleum-based materials.

Biocomposites are the combination of natural fibres/biofibres, with polymer matrices, or reinforced in a matrix of resin (4,5). The properties of these biocomposites is influenced, by the type of fibres, environmental conditions where the material is sourced, and the treatments of the fibres. The biocomposites can be a combination of natural fibres with synthetic resin or with bioresin. Both the resin types, can be in the form of thermoset or thermoplastic. Thermoplastic composites have applications in the automotive industry and as nonstructural components, while thermosets are used in infrastructure (5).

Due to the environmental pollution caused by widespread use of petroleum based matrices and polymers, natural and biodegradable matrices like polysaccharides, starch, cellulose, chitin, proteins, collagen/gelatin, casein, lignin, lipids, polyhydroalkanoates, and shellac are being used. These completely natural biocomposites are considered to be useful for short life-cycles or for one-off use (4).

Plants are the common resource for biofibres for engineering applications. Depending on their source, the biofibres are classified as primary and secondary. Primary biofibres are those derived from plants grown for content, like Miscanthus gignateus, kenaf, jute, sisal, hemp and cotton. While secondary biofibres are byproducts from some other primary utilization like cereal straw (from wheat, rye, rice), pineapple leaf fibre, oil palm, bagasses (sugar cane) and coconut coir (4).

Furthermore, fibres are classified as short or long fibres, based on fibre length. Cereal straw, Miscanthus, canary-grass and short rotation coppice are short fibres; hemp and flax are examples of long fibres (4).

In Europe, due to lack of wood fibres and their high cost, wood is being substituted by bagasse, and straw; while particleboards are made using secondary biofibres like hemp, tobacco, vines,cotton, raspberry, maize or sunflower (4).

In the production of biocomposites, the compressive strength, shear strength, impact resistance, Young's modulus, tensile strength and flexural strength of fibres are important characteristics that need to be considered (1,4).

1. In structural and infrastructure applications, biocomposites have been used to develop load-bearing elements like beams, roof, multipurpose panels, and water tanks (5). After electricity, the roofing sector is the second largest user and industrial useage for corrosion resistance, pipes and tanks is the third largest user of glass fibre in Europe. Since this material has moderate strength, it can easily be replaced by biocomposites (5).

2. Roof coverings, roof tiles and roof sheets, can be made by non-structural biocomposites (1).

3. Insulation which is currently mineral-based could use biocomposites. This would avoid toxic production processes. Moreover, they can be treated by inorganic fire retardants to inhibit flame and smouldering combustion (1).

4. Wall and floor coverings of varying types, such as decorative panelling, cubicle walls, ceiling panels can be made using non-structural biocomposites (1,3).

5. Doors, windows, door panels and clad components, that are traditional made from timber can be made from biocomposites (1).

6. Fittings in the kitchen (cupboards, countertops) and bathroom accessories (towel rails etc), that usually use aluminium, steel, brass and plastics (oil based) can be easily replaced by bioplastics (1,4).

7. Biocomposites can be used as temporary, and adjustable components in renovation, especially in seismic regions (3)

8. Biocomposites can be used in infrastructure like pedestrain bridges (4,5).

9. Bio-concrete: Hemp, in a mixture with lime, has been used to make hempcrete for use in wattle and daub houses in France (8). Now, a Dutch firm NNRGY is trying to develop bio-concrete, incorporating locally grown Miscanthus, for use in 3D printing of construction elements, instead of plastic (6).

10. A recent EU study (BIOBUILD) has made bio-composites with hemp that can be used even on the outer facade of a building (10).

Miscanthus is most popular in the production of medium density fibre board, that is a type of particleboard, with uses in construction, furniture (for indoor and outdoor use). It has also been traditionally used for thatching in Japan (7,8).

A research group in Canada has found that making a biocomposite with poly(butylene succinate) (PBS) and 50 wt% Miscanthus fibre resulted in 22, 139 and 47% improvement in tensile, flexural and impact strength compared to neat PBS. The new biocomposite has superior mechanical and thermo-mechanical properties (9).

The biocomposites have lower weight, and half the density of glassfibres. They can be moulded into many different forms, increasing the range of their uses. Biofibres perform better in crash tests, with no splintering. Moreover, they exhibit good thermal insulation and acoustic properties due to their hollow tubular nature. Furthermore, making them more attractive is their lower manufacturing costs (4).

Biocomposites require less energy and water in production, there is less wasteage in production and assembly, since they are recyclable and the waste can be reused (1).

The production process and assembly of biocomposites is not toxic like that of synthetic mineral based composites, so has no adverse health effects on workers (1). There is no dermal problems in handling them as in the case of glassfibres (4). Hence, they can be produced by micro, small and medium sized enterprises, even in rural areas (1).

The raw materials from the Miscanthus crop are produced annually and are easily renewable; they are carbon neutral with practically no greenhouses gases emissions during manufacture and use. The biocomposites are biodegradable at the end of their product life-cycle (1). Moreover, they do not pose a bio-hazardous risk during disposal as is the case with synthetic composites (4).

Biocomposites are being widely used indoors and outdoors in construction. The increased interest in local Miscanthus cultivation, and research in its application, should soon make it popular among biocomposites.