Growing sustainable Miscanthus Giganteus is a positive route to incorporation of sustainability and organic practices into a profitable farming roadmap.

Sustainable agriculture is defined ‘as practices that meet current and future societal needs for food, fibre, energy, ecosystem services, and healthy lives' (1). So in the calculation of net benefit to society, all costs and benefits of agricultural practices must be considered. This analysis should include the health and environmental costs of farming too. Currently these costs are not included in evaluating conventional farming.

Conventional agricultural production and distribution are directly responsible for 14 per cent of total greenhouse gas emissions. This is mainly due to use of chemical fertilization, and use of fossil fuels for tillage. Chemical fertilizer production is energy-intensive and releases greenhouse gases carbon dioxide, methane and nitrous oxide, all contributing to climate change. Moreover, a major portion of the fertilizers applied is lost due to leaching, run-off during rainfall and use by weeds. Continuous use of fertilizers damages soil structure and kills beneficial soil microbes that normally maintain soil fertility, leaving the land barren. Thus more and more fertilizers are necessary in subsequent years, but produce less. In addition deep ploughing combined with heavy rains leads to soil erosion. Soluble forms of nutrients from fertilizers, leaches into soil, contaminating underground aquifers. Similarly agricultural runoff pollutes streams and ponds, resulting in eutrophication where the increased load of nutrients encourages growth of algae and other aquatic plants. This leads to hypoxia, a reduction in the levels of oxygen in water, killing fish and other aquatic life. Chemical pesticides and herbicides kill non-target plants, birds, insects (notably bees), or is used by them and then enters the food-chain when they are further eaten by other animals and ultimately by humans. Bee population and some bird species are decreasing in numbers worldwide, affecting pollination of many crops, reducing production of fruits and vegetables.

Sustainable farming is one that involves less input costs for cultivation, keeps pests and weeds under control in a non-toxic manner, prevents pollution, uses less fossil fuels, and conserves soil and water resources. It preserves the ecological balance, while promoting biological diversity and protection of the environment. What is more, the competitive salary and benefits given to personnel ensures social equity. Organic farming is sustainable farming at its best. Organic farming, is also more profitable than conventional farming, according to a paper published by the UN’s Food and Agriculture Organization in 2009. In European farms, it was found that though fixed costs can be higher, operating costs are 60-70% less. This happens due to a reduction in use of fuel, synthetic fertilizers and pesticides, at a time when fossil fuel and energy prices are rising. Labour costs, though are 10-20% higher in organic farms. However conventional farms have a higher debt load. Organic farms can yield less compared to conventional farms, but command a premium price, so they manage to gross greater economical margins. On the other hand, conventional farming continues to benefit from hidden subsidies, as well as more research and extension services. The area under organic farming has increased from 2000 to 2012 by 6.7% yearly to an estimated 9.6 million ha, which is 5.4% of the total utilized agricultural area in the European Union. Organic farming is central to its new Common agricultural policy, and organic farmers will be able to automatically claim Direct payments via the new greening payment from 2015 onwards. 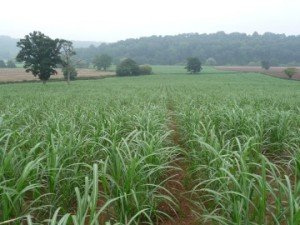 Sustainability of energy crops is determined by input levels, recycling of nutrients, application of pesticides, water use efficiency, pollution and soil carbon-sequestration. Miscanthus Giganteus, is one of the most popular lignocellulose energy crops, and it is sustainable, whether it is cultivated organically or even conventionally, due to its functional traits. Giant Miscanthus is a perennial tall grass with a C4 photosynthetic pathway. C4 plants have nearly twice the water-use efficiency (WUE) of C3 plants and a higher potential biomass yield. It grows up to 4 metres high and roots go down 2.4 metres deep. The underground dry weight of roots and rhizome are together equal to the total shoot dry weight.

Inputs and Nutrient recycling in Miscanthus

Similar to switchgrass, Miscanthus Giganteus translocates most of the nitrogen, phosphorus, potassium and other minerals in the shoots down to the rhizome and root system, by late Autumn. So, even though the above ground biomass is harvested, the nutrients remain underground. Together with the senescent leaf material that remains in the field and additional atmospheric deposition of elements that occurs, very little supplementary fertilization is necessary for subsequent crops. The biomass produced in the first year is also allowed to remain in the field, and this helps to provide valuable organic matter to the soil. In a study by the University of Illinois, Giant Miscanthus was found to reduce nitrogen pollution in water more than switchgrass, corn or soyabeans. Organically grown Miscanthus and switchgrass showed the least nitrogen pollution, but Miscanthus removed more nitrogen due to its deep perennial roots. This means that it is the most efficient, in its use of available nitrogen in the soil. Most soils have the nutrients needed by Miscanthus, so little extra input is needed.

In Europe, Miscanthus Giganteus is relatively free of insect pests and diseases when compared to N. America, reducing dependence on chemical pesticides.

As a perennial grass, each crop planting of Miscanthus can last for 25 years. So tilling of land, and use of fossil fuels (and the accompanying pollution) is necessary only once in this period. This use remains the same for conventional and organic cultivation of Miscanthus. Use of fertilizers how ever little, in conventional cultivation of Giant Miscanthus, causes additional pollution. Production of fertilizers uses exhaustible resources and energy; and pollution occurs through release of polluting greenhouses gases and eutrophication. Chemical fertilizers' use can be reduced or replaced by using energy crop residues, that is produced through anaerobic digestion of energy crops, and is rich in nitrogen. 65% of the nitrogen is in available forms use-able by plants.

Miscanthus Giganteus has a higher WUE than oil, or sugar and starch crops. However, since it has a longer vegetative period than switchgrass or corn, leading to higher biomass yields, it needs more water. So soils can dry up, or the run-off into streams can be reduced. Since, its water needs are the highest in early spring, when flooding is a concern in some regions, this can actually be an advantage. Moreover, its effect on the quality of water is beneficial, as it reduces the nitrate concentrations in it, to below drinking water quality.

The greenhouse gas (GHG) balance of production and utilisation of energy crops is approximately zero, as the crop burnt releases carbon dioxide that it had captured during its vegetative stage. Exceptions are some CO2 equivalents release (carbon dioxide, and nitrous oxide which is 296 times more damaging to the ozone layer than carbon dioxide) mainly caused by nitrogen fertilization and consumption of fossil energy. Since perennial crops do not need repeated tillage, 37% of GHG emissions are reduced (5), and there is positive balance of carbon in soil. Short rotation coppice (SRC) crops lasting for 1-25 years, such as Miscanthus, effect considerable soil carbon-sequestration to the tune of 160 – 640 kg C/acre/year, saving 0.6 – 2.4 t CO2/acre/year (1 kg C – 3.67 CO2). Moreover, in SRC, the roots of the trees save an additional quantity of carbon that is not recorded in this figure. In organic farming, where chemical fertilization is avoided, the positive carbon balance would be higher.

The tillage, land preparation, planting of sterile triploid rhizomes, and harvest practices in organic farming are similar to conventional grown crops. So, only stages requiring alternatives to chemical use are discussed here.

In Europe, for a biomass yield of 10 to 15 tonnes/hectare, the nutrients removed by harvest of Miscanthus stems are, Nitrogen         22-40 kg/acre Phosphorus        2.5-6 kg/acre Potassium        20-53 kg/acre Magnesium        1.5-5 kg/acre Soil nutrients can be monitored periodically and necessary deficiencies supplemented by manure if necessary. Excess of nutrients would only encourage weeds. European production does not usually need fertilization in the first two years.

In the first two years, the cover of the Miscanthus Giganteus is not 100%, so weeds can persist. For the same reason, there are more weeds early in the growing season, and decrease in number as the vegetative period progresses. However, soil type can be important too; it is on heavier soils that there are more numbers and species of weeds, than on light soils. In organic cultivation, the crop can slow down somewhat and maturity can be delayed by a year or two, due to weeds on the ground. To combat this, several measures are advocated. Mechanical fallowing reduces weed seed reserves. This can be followed by growing an organic cover crop before planting the rhizomes, similar to conventional farming practices. Then during land preparation a deeper mulch (or manure) is used to cover the ground. A comparison of convention and organic energy crops found that, while grain crops showed a difference up to 16%, biomass crops yields (inclusive of weeds) were less by only around 5% in organic cultivation. Miscanthus x giganteus has many uses, besides use as an energy crop, so organic cultivation is an attractive option. Use of prime-priced organic Miscanthus as bedding in organic animal production of dairy or beef cattle, broiler chickens, sheep or even deep-bedded pigs, or for production of organic textiles, should help to compensate any yield reduction.